Cornerstone – Heartbreaking Documentary Shining Light on Plight and Future of HIV/AIDS Orphans in Uganda – Premieres in NYC on Tuesday, December 13

What: U.S. Premiere of “Cornerstone” – documentary film about Nyaka AIDS Orphans Project – and celebration of Ugandan tenacity and culture in face of pandemic.

Why: To raise awareness of - and support for - Nyaka AIDS Orphans Project’s 15-year response to systemic deprivation, poverty, and hunger through a holistic approach to community development, education, and healthcare.

Ambassador Kintu Nyago, the Deputy Permanent Representative of the Permanent Mission of Uganda to the United Nations

Cornerstone – Heartbreaking Documentary Shining Light on Plight and Future of HIV/AIDS Orphans in Uganda – Premieres in NYC on Tuesday, December 13

What: U.S. Premiere of “Cornerstone” – documentary film about Nyaka AIDS Orphans Project – and celebration of Ugandan tenacity and culture in face of pandemic.

Why: To raise awareness of - and support for - Nyaka AIDS Orphans Project’s 15-year response to systemic deprivation, poverty, and hunger through a holistic approach to community development, education, and healthcare.

Who: Debi Lang, director and award-winning humanitarian journalist, and

Highly anticipated Documentary to premiere on December 1st – World AIDS Day
East Lansing, Michigan- The highly anticipated CARING FOR THE WORLD FILMS (CFTWF) documentary, CORNERSTONE, Directed and Produced by Debi Lang, about THE NYAKA AIDS ORPHANS PROJECT and CNN Hero, Jackson Kaguri, is gearing up for a Fall rollout, led by a global marketing and publicity team. Lainie Sevante' Wulkan, Co-Founder/Owner of Albuquerque, New Mexico-based Cinder Cone Media Worldwide, is the point person for the global efforts to bring CORNERSTONE to a worldwide stage. Wulkan is supported with PR strategies by New York-based entertainment publicist, Perry Serpa of Good Cop PR Agency. Marketing & PR efforts for the Ugandan contingent will be announced in an upcoming release. Additional representation for CORNERSTONE'S Filmmaker Debi Lang and CFTWF is Publicist Vicki Young of Dallas, Texas based agency, The Young Company. "The work we're doing here in Uganda is vital for the interests of three generations," said Twesigye Jackson Kaguri, Founder and Executive Director of THE NYAKA AIDS ORPHANS PROJECT. "Through the blessings of these passionate and caring people coming together to assist in the promotion of this film, important awareness will be raised about the work we're doing to help the children of NYAKA have a hopeful and successful future." More details on the December 1st world premiere in Kampala, Uganda, followed by Europe and US premieres will be available early Fall 2016. A full creative roll out, including a dedicated website for the film with information on holding private screenings, fundraiser inquiries, educational sector screening opportunities and film festival announcements will be announced shortly. EPKs and trailers will be available soon and a full scale social media campaign is also in the works.

Nyaka's founder and Executive Director, Twesigye Jackson Kaguri, will be awarded an honorary Doctor of Humanities degree from the University of Shenandoah. Mr. Kaguri will receive the degree and address Shenandoah University's Class of 2016 during the university's Commencement exercises on Saturday, May 14. Mr. Kaguri will be honored for his work over the past 15 years to support the orphaned children of southwest Uganda and their grandmothers. He founded the Nyaka AIDS Orphans Project in 2001 after witnessing the devastating effects of HIV/AIDS in his own family and in his hometown of Nyakagyezi. Nyaka uses a holistic, human rights based approach to educate and empower HIV/AIDS orphans and the grandmothers who are raising them.

About Shenandoah University Shenandoah University, established in 1875, is a private, nationally recognized applied liberal arts university that invites you to join a close-knit community rich in creative energy and intellectual challenge. With approximately 4,000 students across more than 90 programs in seven schools, you will study with accomplished professors who provide you with focused, individual attention. Through innovative partnerships and programs, at both the local and global level, there are exceptional opportunities for you to learn in and out of the classroom. At Shenandoah, faculty will know you by name, and you will receive the encouragement and support you seek as you aspire to achieve your goals and plans for the future.

About the Event Shenandoah University's May Commencement Ceremony is scheduled for 10 a.m. on Saturday, May 14, 2016, on the intramural field behind the Brandt Student Center, located on the main campus of Shenandoah University in Winchester, Virginia. The ceremony will stream live, as well.

More information about the event 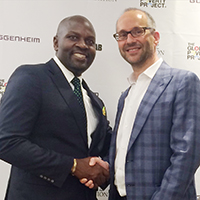 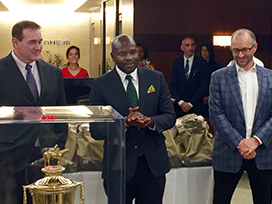 In September 2015, we were informed that our Founder and Executive Director, Twesigye Jackson Kaguri, was selected as one of four finalists for the 2015 Waislitz Global Citizen Award.

The four finalists were challenged to compete to win the award by popular vote. Our Nyaka family responded with such excitement and energy! You shared on social media, with your friends, in your schools, places of worship, and everywhere else you could. We were so touched by your messages of encouragement, prayers, and well wishes. All of your hard work payed off!

Jackson was officially named the winner of the 2015 Waislitz Global Citizen Award on Thursday, September 24th at the Guggenheim Partners in New York City.

Jackson will address more than 60,000 event attendees, world leaders, and change makers at the Global Citizen Festival on September 26th, 2015 held in Central Part in New York City. The entire event will be live streamed over the internet. Visit their website to learn more!

The award includes a prize of $100,000 USD that will be used to further the mission of the Nyaka AIDS Orphans Project to end extreme poverty for HIV/AIDS orphans and their grandmothers in southwest Uganda.

A Special Thank You! We would like to thank you, our Nyaka family, for voting, sharing, and encouraging us during this campaign. You have shown what a group of dedicated people can do when we work together. YOU are a hero!

Thank you to The Global Poverty Project​ ,The Waislitz Foundation and Global Citizen, the entire 2015 Waislitz Global Citizen Award Judging Committee, and a special thanks to Barb Dunlap, our dedicated volunteer, advocate, and friend, for nominating Jackson for this award.

“We are proud to announce the honorees for our prestigious Equanimity Awards Benefit Gala(EABG),” said Lumbie Mlambo, CEO of Equanimity LLCand co-founder of JB Dondolo, Inc. charity. “First and foremost, this is a charity event benefiting JB Dondolo, Inc. charity 100%. So, we want to raise awareness of the charity’s current program and project in the local and global communities. We will also acknowledge and reward individuals and companies for their efforts in the community.”

The EABG will honor those making a notable impact in their communities: visionaries and trailblazers in business, entrepreneurs, leaders, champions, educators, and those advancing breakthroughs in literacy, sports, entertainment, and the non-profit sector who have contributed toward progress and development in communities across the globe.

“These honorees were nominated by their peers because of their dedication and commitment to inspire those around them,” said Mlambo. “Some were nominated by Equanimity Magazine readers. They are all role models for the youth who will continue to shape and transform our communities for a better future.”

In August 2015, we were notified that our Founder and Executive Director, Twesigye Jackson Kaguri, had been selected as one of four finalists for the 2015 Waislitz Global Citizen Award, presented by The Global Poverty Project​ and The Waislitz Foundation.

he four finalists were given the mission to get the most votes from their supporters and from Global Citizens around the world. The winner will be given the award and a prize of $100,000 USD to put towards the good work of their organization.

We have been so overwhelmed by the outpouring of support from our Nyaka family. So many of you have voted and shared the good news with your friends. We were also so touched by the outpouring of support from your students—some of which are in university or beginning their careers in Uganda. They were so happy to have a way to give back. They organized voting campaigns at their schools and with their friends.

The voting period ended on September 16th, 2015 and results will be announced on September 24th, 2015. We will post the results here on our home page and send out an email as soon as they are announced. Subscribe to our email list to be included in the email blast! You can also visit our Facebook, Twitter, and Instagram accounts to see our posts about the results.

Email us at info@nyakaschool.org or call (517) 575-6623 to learn about this award or other ways you can help make spread the word about Nyaka.

We are pleased to announce that Caring For The World Films will begin production of a new documentary on the Nyaka AIDS Orphans Project. The film will focus on the Nyaka Primary School in rural Uganda.

The documentary will be directed by award-winning Director Debi Lang, and produced in cooperation with Nyaka AIDS Orphans Project’s founder and 2012 CNN Hero Jackson Kaguri. Steve Lang will serve as executive producer, award-winning photographer Jan Koehler as cinematographer, Emily Jones as camera assistant, Anna Ashford as production coordinator and Dylan Beckerich as boom operator. Other members of the team are Dr. Wes Hickey, Interim Dean, College of Education and Psychology at the University of Texas at Tyler and Reinhart Koehler, Board Chair of NPH International. The Young Company will create graphics and handle media relations for the project.

“It has taken us over two years of reviewing hundreds of submissions to find the right organization that meets all of our criteria,” said Lang. “I am extremely honored and excited to be working with Mr.Kaguri and his team. The inspiring, yet tragic journey to save a generation of children orphaned by the HIV/AIDS pandemic, which ravaged Uganda, will undoubtedly move everyone. The impact he and his organization have made cannot be exaggerated.”

Lang’s interest in Nyaka surfaced after she read Kaguri’s compelling book “Schools For My Village”. The film will focus on Kaguri’s personal story as well as his perseverant efforts to create a sustainable and holistic solution to combat the poverty, hunger and illness that nearly destroyed his village. It will also explore the community’s determined involvement, which cemented the success of its many far-reaching programs. Production will begin later this year.

Lang added, “Through our pro-bono documentary films, we hope to bring awareness to the exhaustive efforts of relatively unknown and successful non-profit humanitarian organizations such as the Nyaka AIDS Orphans Project. Nyaka has undoubtedly touched the lives of thousands in Uganda and has made a difference where others have failed. This group of humanitarians is certainly worthy of having their story showcased.” To learn more and participate in this exciting project, visit: http://igg.me/at/NyakaDocumentary2016/

Caring For The World Films (CFTWF) is an award-winning 501 (c)(3) non-profit organization. Founded in 2007, it has distinguished itself as THE production company non-profit organizations trust to tell their story. The CFTWF team searches the planet for relatively unknown, sustainable humanitarian organizations, which have had a tangible, positive impact on the populations they serve AND have a compelling back-story. Caring For The World Films has been honored with twenty-five international awards and film festival invitations including six Telly Awards and six Omni Awards.

Past documentaries include “Road To San Marcos”, “Return To San Marcos”, “Behind The Lines In Los Encinitos”, “Building a Better Belize” and most recently “Hearts In The Himalayas” for which Director Debi Lang received the Third World Indie Film Festival Humanitarian Award. To learn more about Caring for the World Films, please visit www.caringfortheworldfilms.org